View source
watch 02:58
No Man's Sky Update - The Loop
Do you like this video?
Play Sound
This article is about Skyrays in Subnautica. Click here for information on this subject in Below Zero.

The Skyray is a small, passive fauna species. It can be found flying around over the water or in locations with large landmasses such as the Aurora, the Floating Island, or the Mountain Island.

The Skyray is a small, avian creature having two wings covered with white feathers. Its head, chest, and wing tips are black, connected by a thin line spanning the front edge of its wings.

The head has two small, completely white eyes situated on each side, and a black beak.

Skyrays tend to congregate in small groups, often seen flying around Lifepod 5, the Aurora, and the Islands.

Skyrays can be seen resting on the ground on the Mountain Island and the Floating Island, taking off upon being approached.

Skyrays can live only on land and will die once put in water. 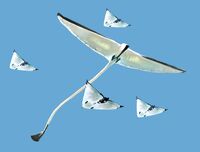