View source
watch 02:34
Fire Emblem Warriors: Three Hopes - The Loop
Do you like this video?
Play Sound
This article is about the Squidshark. You may be looking for the Brute Shark.

1200 seconds (only when killed by a creature)

The Squidshark is a highly aggressive fauna species that can be found in the Deep Lilypads Cave, Deep Twisty Bridges and the Lilypad Islands.

The Squidshark has a bulky anterior region with a slender, streamlined posterior, tapering to a point at each end and lacking a tail fin. It utilizes countershading to help it remain camouflaged, with a dark blue dorsal side and a greyish-white belly that lets it blend in with the ice/sky above when viewed from below, and the dark sea when viewed from above.

A large shark-like dorsal fin is situated around one third of the way down the back with four drastically smaller fins running in a line behind it. It has two very long pelvic fins around half the length of the entire body with two translucent blue tendrils beneath of them. There is an extra fin sitting on top of the head and a long fin running down the underside of the tail like that of the Ghost Knifefish.

The Squidshark's mouth has an odd structure; six flaps of skin close together creating a face that tapers to a point, however these flaps can open to expose a jaw that protrudes outwards from the mouth and has seventeen long black tooth-like structures to capture prey items. Its eyes are small and black with a rectangular pupil that glows red. Behind each is a siphon.

The Squidshark is a carnivorous creature and can be seen preying on smaller fauna. While pursuing a target, the flaps on its face open and reveal a large, protruding jaw. If the Squidshark manages to catch the player, it will grab them and deal 40 damage, but the player will escape by forcing their way out of its mouth. However, if this attack is performed and the player has 40 or less health, they will fail to escape its hold and slip into its mouth, which results in an instant kill.

If the player is inside of a vehicle and is within close proximity of a Squidshark, it will perform an electrical attack with its tentacles, whipping them towards whatever is in front of the creature. This attack will temporarily disable the vehicle's power, leaving it open to further attacks.

The Squidshark is a large predatory species that fills a similar ecological niche to sharks on Earth. It takes design inspiration from cephalopods and sharks, specifically the goblin shark for the protruding jaw. Just behind the eyes are a pair of hollow tubes that appear similar in appearance to the specialized siphons of octopuses.

A Squidshark in the Deep Twisty Bridges

A Squidshark charging at its prey

A squidshark in the Lilypad Islands

A Squidshark in the Deep Lilypads Cave

A Squidshark attacking the player

A Squidshark consuming the player

Another early Squidshark - by Alex Ries 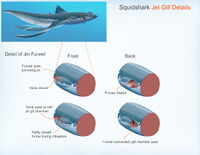 Another design - by Alex Ries

Early model of the Squidshark with open mouth