Mega biome
The Crater is the area in which the main story of Subnautica takes place. The Crater and Sector Zero are the two major ecosystem centers known on Planet 4546B.

The area is likely a guyot; a type of undersea volcanic formation that once protruded above the surface and has now been eroded into a tabletop below the ocean's surface.

The area around the volcano is known as the dead zone or crater edge. It is a vast expanse of featureless water inhabited only by plankton and their planktivorous Leviathan class predators. It is unknown how large this stretch of ocean is.

Within the crater are multiple ecological Biomes. Each is diverse in its very own way. Biomes range from Underwater Islands to Kelp Forests, each supporting their own unique Fauna and Flora. 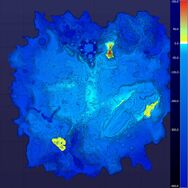 Elevation Heat Map of the Crater

3D Model of the Crater