heatblade
The Thermoblade is a tool and an upgrade to the Survival Knife. It is crafted by using the Modification Station.

In general, it can be used for harvesting or defense. Its primary function is that it cooks any edible fish in one swipe.

If a Bleeder latches onto the player's arm, the player can use the Thermoblade to hit the Bleeder.

Lava Lizards and Sea Dragon Leviathans are completely immune to the Thermoblade, presumably due to their own skin being adapted to extreme temperatures far surpassing the tool.

Thermolade in the player's hand

Thermoblade made with the Modification Station 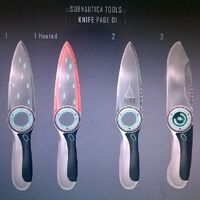