The Time Capsule is a component of the Neptune Escape Rocket that is built during the endgame of Subnautica. It is located in the Cockpit section of the rocket, and has its own control console that allows the player to configure the device. Its purpose is to allow the player to leave behind a message that may be encountered by other players as they explore Subnautica's world in their own playthrough. Interacting with the Time Capsule console is not a prerequisite for launching the Neptune Escape Rocket, and the player can totally ignore it if they wish.

Time capsules may spawn on the seafloor, most often in grassy areas, in the following biomes:

Interacting with the console allows the player to compose a message for later players to find (the title field seems to have been removed in an update), and attach a screenshot taken using the PDA screenshot feature if they so choose. In addition, items can be placed inside the Capsule which will be automatically given to the player who finds it. The internal storage is six slots in a 2×3 grid. Items placed in it have their standard inventory size, and the Capsule accepts any multi-slot object that will physically fit inside it.

A Time Capsule must, at minimum, have text in the "title" field and something in at least one other field (a message, a screenshot or at least one item inside it). If it does not meet these criteria, the message "NOT VALID" will appear in red text under "status," with a note saying that it cannot be uploaded to the server in its current state.

When the player launches the Neptune Rocket with a valid Time Capsule set it will be deployed. The data on its contents is sent to the voting site, where the users can upvote and downvote Time Capsules. Capsules with enough upvotes, after being screened, will be seeded into the game world for other players to find. Their locations have nothing to do with where the rocket that deployed them took off from.

Other players' Time Capsules can be found on the seabed: they can only be found manually, as the Scanner Room has no option to search for them. The game can spawn up to 40 Time Capsules[1], and when opened the content of each is obtained from the central server's approved list. They can only spawn in some of several pre-set locations, similar to other objects such as outcrops. Interacting with them will allow the player to receive their contents. The messages and any included screenshots from Time Capsules the player has discovered are saved to the PDA in a special subsection of the data bank tab, allowing them to be re-read at any time.

If the player picks up a Time Capsule while their inventory is too full to take all of its contents, the player will be temporarily given additional space for the extra items. Removing items from the visible part of the inventory display can be used to bring the "overflowing" items back into view.

Other players' Time Capsules will not spawn if certain parental controls are active.

A Time Capsule in the Safe Shallows

A Time Capsule in the Grassy Plateaus

A Time Capsule in the Kelp Forest

A Time Capsule in the Crash Zone

A Time Capsule in the Underwater Islands

A Time Capsule in the Bulb Zone

A Time Capsule wedged in the Mushroom Forest

A Time Capsule in the Northern Blood Kelp Zone

The Time Capsule Terminal in the Neptune Escape Rocket. 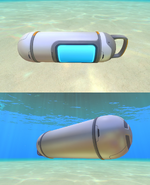 The Time Capsule from a Developer Screenshot.

Model of the terminal from Sketchfab