Start a Wiki
The Time Capsule is a tool that is used during the endgame of Subnautica. A Time Capsule can be jettisoned via the Neptune Escape Rocket's Cockpit, and can be edited to include a screenshot, various items, and a message for later players to find.

Upon being sent, Time Capsules are sent to this website on which people can upvote and downvote Time Capsules. Capsules with enough upvotes, after being screened, will be seeded into the game world for players to find.

Time Capsules can be found at random points on the seabed, and can be opened to find various items, a screenshot and a message From the player who made the time capsule. Discovered Time Capsules are imported to the PDA and can be read again.

A Time Capsule on the seabed 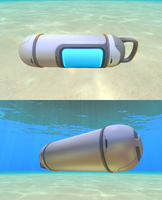 Time Capsule Concept Art
Add a photo to this gallery

Retrieved from "https://subnautica.fandom.com/wiki/Time_Capsule?oldid=297866"
Community content is available under CC-BY-SA unless otherwise noted.