View source
watch 02:56
Raise a Floppa - The Loop
Do you like this video?
Play Sound
This article is about the Tree Spires Biome. You may be looking for the geological feature of the same name.

The Tree Spires is one of the three divisions of the thermal zone, a biome dominated by large, branching Hydrothermal Vents called Tree Spires. It is the home of the Ventgarden.

The biome is dominated by cliffs and small ridges, with noticeable erosion in some areas. Clusters of Cliff Lanterns can be seen on growing on many of the cliffs in the biome. The southern section is also reasonably deeper than the rest of the biome, as the biome gradually slopes down into the World Edge. The western section shares a boundary with the West Arctic.

The Main Tree Spires is the main section of the biome, hosting a variety of both Fauna and Flora. The area also hosts the Leviathans mentioned previously. The ridges and cliffs of the biome support a variety of Flora native to the biome, some including the Reaper's Wineglass and the Cliff Lanterns.

The Spiral Plant, a flora needed for the crafting of Synthetic Fibers, is found inside the Ventgardens.

Overview of the area during the day

Overview of the area at night

A pair of Juvenile Ventgardens swimming in the open

One of the Adult Ventgardens from a distance

A cluster of Hydrothermal Spires in the area

A close view of a Tree Spire

A Glow Whale swimming close to the biome

The border with the Thermal Spires

A shallower section of the biome

The Tree Spires Fissure accounts for the small fissures found in the cliffs and seabed surrounding the Ventgardens, and the two cave systems, each located under one of the Ventgardens. These fissures hold many rare and valuable Raw Materials, such as Uraninite Crystals or Ruby.

The cave systems themselves lack many Fauna and Flora, but contain Thermal Plant Fragments.

The entrance to the northern fissure

The entrance to the southern fissure

Deeper into the fissure under the northern Ventgarden

The main chamber of the northern fissure

A Tech Site found in the fissure

The intersection with the Lilypads Crevice

The nearby spires are substantial thermal vent structures, hospitable to coral formation

The Large Tree Spire is a smaller section of the Tree Spires found on a large rock formation located in the center of the biome. This area is easily identified by the large Tree Spire located on the top.

The area itself lacks many Raw Materials and Fauna, but it's the only area to possess Lily Paddlers, and has no specific points of interest.

The large Tree Spire can be used as a natural marker, and can also be taken advantage of to make a Seabase on thanks to its proximity to the surface and the readily available Thermal Plant fragments scattered around it.

The bottom of the rock formation

A cliffside of the area with multiple Tornado Plates 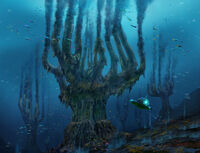