The Twisted Mandrake is a flora present in both the Mid level and Shallow Twisty Bridges and close relative of the Broken Mandrake.

This flora is rather large and has 3 distinct parts: the foliage on top, the thick trunk, and the tendril-like roots near its base.

At the top of the plant appears to be the leafy blue foliage branching out directly from the trunk, which is big and pale violet in color and is covered in tiny red corals. The bottom half of the trunk appears to have crease-like ripples, with multiple tendril-like roots extend outwards.

The Twisted Mandrake in the Shallow Twisty Bridges 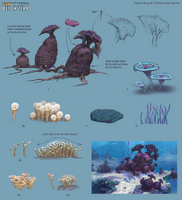