View source
watch 02:58
No Man's Sky Update - The Loop
Do you like this video?
Play Sound
This article is about the Ventgarden. You may be looking for the Juvenile Ventgarden.

The Vent Garden harvests geothermal energy to nurture the life that grows within.

The Ventgarden is a leviathan class fauna species. There are currently two Ventgardens in game, both found in the Tree Spires. It is the adult form of the Juvenile Ventgarden.

The Ventgarden's main body is round and has a petal-like set of blue and yellow patterned frills on top of it. The bottom of the body seems to have an opening that is sealed shut by a cone-shaped set of flaps when swimming and opens when the organism is above a Hydrothermal Vent. The Ventgarden's body also resembles the top of a mushroom. From the base of the body six long ciliated tentacles extend downwards to red branching tips. Between each pair of tentacles is a glowing yellow circle, the nature of which are unknown, possibly being eyes.

From the base of the bell, six long branches protrude and curve upwards, each with multiple "plateaus" attached which provide surfaces for flora to grow within the bell.

The adult Ventgardens are only seen stationary over Hydrothermal Vents with their tentacles anchoring them in place. It stays over the vent, allowing hot water enriched with nutrients to flow into the bell through an opening in the bottom of the body.

When sitting over a Hydrothermal Vent, an opening on the underside of the body is opened and the player can swim inside the body through this opening.

The Ventgarden expels excess fluid through its top vent. The excess fluid expelled is able to push the player 15 meters upwards.

The Ventgarden appears very similar in appearance to the siphonophore, the Portuguese man o' war which like the Ventgarden is also a colonial organism.

The Ventgarden bears a striking resemblance to a type of underwater greenhouse known as "Nemo's Garden". It is possible it was based on this.

The top of a Ventgarden

The tentacles of a Ventgarden

A Ventgarden, filtering water out of a top orifice

The entrance to the center, with water flowing in

The exit into the center, with water flowing outwards

The inside of a Ventgarden

The Bell of a Ventgarden 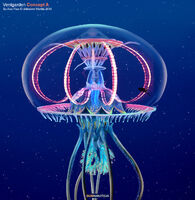 Concept A - by Alex Ries 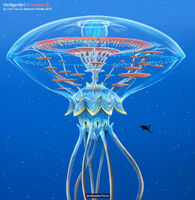 Concept B - by Alex Ries 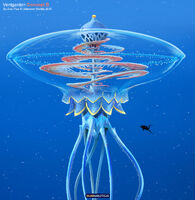