The X Compartment is a Seabase module. It is a corridor with four exits shaped like an "X". 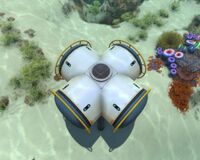 X Compartment Ceiling Window
Add a photo to this gallery
Retrieved from "https://subnautica.fandom.com/wiki/X_Compartment?oldid=340769"
Community content is available under CC-BY-SA unless otherwise noted.